The fear of mice (musophobia) affects 20 percent of adults according to a Gallup™ poll and has the widest spread of all fears between the sexes.  An incredible 5.5 times more women than men are afraid of mice.  This is consistent with the fact that mice are far more scared of men than women.  Men are more likely to hurt them.

Compared to all other fears, this one is difficult to explain or classify.

A. Primordial Fear of Mice. 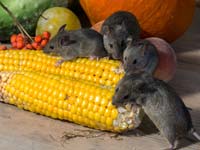 mice may have roots in the primordial sections of the brain.  Most of these primitive fears arise from life-or-death situations, such as an animal will kill you, jumping off a cliff will kill you, trying to cross a river when you can’t swim will kill you; a stranger entering your home will kill you, etc.  That does not appear to be a reason for fear of mice.

The possible perception of starvation may be a connection, as discussed in the Read More Link below.

Perception of Starvation. The mice population is one of the most significant threats to human food supplies. Taking away the food causes starvation, a life, and death scenario.  Every mouse will produce 3 to 14 babies with each birth cycle, and each mouse can reproduce 5 to 10 times yearly.  This means that one mouse can theoretically produce up to 289 billion, yes billion, duplicates each year.  This could wipe out the food supply very quickly.  In this regard, reducing the mouse population would be essential and support a strong dislike of the furry animal.  Since the females in ancient times were in charge of the food storage, this would be consistent with women being 5.5 times more fearful than men.

But hate and fear are different emotions.   Being afraid of the mouse and running away does the opposite in protecting the food supply.  Emotions are complicated matters.  For example, some people say that one cannot hate until one first experienced love.

B. Learned Fear of Mice

a. Traumatic Event. Most websites suggest that the fear of mice arises from a traumatic experience.  This seems inconsistent since a tiny mouse cannot inflict significant physical injury to a human.  Mouse’s physical appearance is not scary as a spider.  The mouse’s features are cute — large eyes, ears, button nose, small hands, and soft hair.

But there are indirect connections to physical Injury, as discussed in the Read More link below.

b. Perception of Catching a Disease. The general perception is that the mouse is a carrier of many diseases.  This may be the result of social pressures.

“Real” and “perceived” are the same electrical signals in the brain.  Therefore, whatever a person believes to be true is true regardless of the facts.

The CDC reflects this social pressure.  It states that mice (and rats) spread over 35 diseases by direct contact.  This is disclosed on the front page.  But the pages that list the disorders show that the conditions are extremely rare and primarily encountered in remote jungle environments.

One way to reduce your fear of mice is to think of some benefits from mice.  Here are four things that mice do for us:

3. Parent Connection to Fear of Mice.

a. Over-Protective Parents.  Was either of your parents afraid of mice? Did they jump up on a chair when a mouse appeared?  Perhaps they screamed when the little creature ran across the room?   Did you have an over-protective parent that wouldn’t let you return to a room where a mouse was observed?

Over-protection fears usually develop between the ages of 5 and 11.  This is the period where the parents have the most significant influence.

Click on the Read More Link for other Connections from Parents.

Read More on the Parent Connection

In New York, a dozen women who were pregnant on 9/11 and developed PTSD.  A study showed these women exhibited a lower cortisol hormone level than those not exposed to the 9/11 attack.  The babies of the PTSD group also had a lower cortisol level.  Some people opine that perhaps the odor molecules were carried from parent to baby in the womb.  That theory is unlikely since a person’s blood changes every 120 days.  All organ cells are replaced over various times except the visual cortex, which does not change.

These observations are intriguing.  It means that every piece of food eaten, every visual observation, every smell, every taste, everything you hear, and every emotional experience has the potential to be passed to the next generation.  This supports the view that feelings may be passed between generations in addition to DNA.

Folklore from Older Generations. There are many folklore reasons given why people are afraid of mice.

There are enormous manipulation efforts conducted by the movie industry, the news media industry, the agriculture industry, and the exterminator business.   It suggests that a mouse problem has political and economic ramifications to justify pushing a particular agenda.   There is an entire section directed to Manipulation.

The personality trait most applicable would be the B and D Types.    People afraid of mice include Tinie Tempah, Walt Disney, Will Smith, etc.