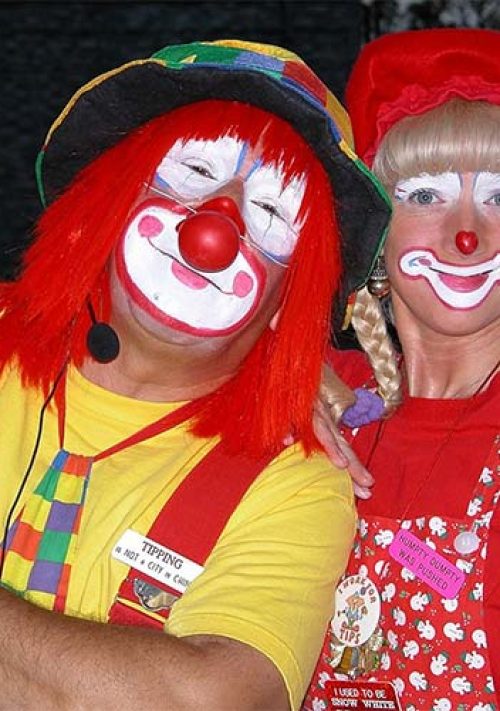 Humor is necessary for adding Joy to your life and decreasing fear.    It is powerful and should not be underappreciated.  Comedy can take on several different forms, as illustrated below.

A cartoon is a simple drawing or caricature showing the features of its subjects in a humorously exaggerated or satirical way.  Some comics have an underlying point of view being pushed.  But most cartoonists only want to bring a simile to the reader.

A frequent source of humor is directly from the start.  These would be comedians and comedy clubs.   Humor can take on several different forms.  The following are a few of the most recognized.

There is physical humor, also known as slapstick.  It is a technique perfected by the clown.  Sample:

A customer fiddles with a washroom faucet at a service station.  He wiggles the handle.  Only a small amount of water comes out.  So he takes a closer look and fiddles some more.  Then water gushes out, soaking him.

There is self-deprecating humor.  This is practiced by almost all comedians, who set themselves up to be the butt of the joke.  All comedians are experts on this.   Samples:

Tomorrow’s garbage day.  It’s great to have a day dedicated to me and known to every person in every town in America.

“I told my psychiatrist that everyone hates me. He said I was being ridiculous—everyone hasn’t met me yet.” —said Rodney Dangerfield.

There is surreal humor.  That is based on illogical and absurd situations.  Sample:

I have discovered I have superpowers.  With nothing more than my stare, I can melt ice.  It takes me about an hour, sometimes longer.

Parody humor is making fun of a situation or person by sarcasm or mocking imitation. Sample:

I love my 5 -year old son.  He jumps into my shoes and prances around the house.  He stops in front of the fish tank and dangles my driver’s license.  He says, “Don’t mess with me.  I have a fishing license.”

Improvisational comedy.  This is exceedingly difficult for most people, but comedians who master it are extraordinarily skilled.  It requires thinking outside of the box and incorporating something that does not fit in the box.  Sample:

Situation a Geologist at a speed dating event.  “I’m a geologist.  Hitting rock bottom is what I do.”

There is a situational comedy.  A current event, politician, song, game, or other hot topic is covered.  Sample:

A comedian points to an attractive girl sitting between two men on the front row at a comedy club.  “Did you just come from the filming of Bachelorette?”  “Which one did you choose?”

Two guys are talking at a bar.  Suddenly, a lady on a bar stool several feet away falls off the chair and lands on her tush.  The guy turns to the other and says, “Don’t you hate it when that happens.”

A man enters an elevator.  The doors close.  He farts, and the others in the elevator shuffle together in the furthest corner.

“Potty training is similar to surfing classes.  In the beginning, it’s hopeful and stimulating, but everyone is crying by the time it’s over.”

Dark Humor is a favorite go-to move when politics, criminal conduct, and the like are involved.   Dark humor has its place in comedy clubs, but not so much on this website.

There are comedy clubs in about every city.  An interent search would be an excellent place to start.    Here are a few links to clubs with a multi-state reach.

A few Comedians include the following.  The links are not provided since there is no way to control if objectionable language is used on the various websites.