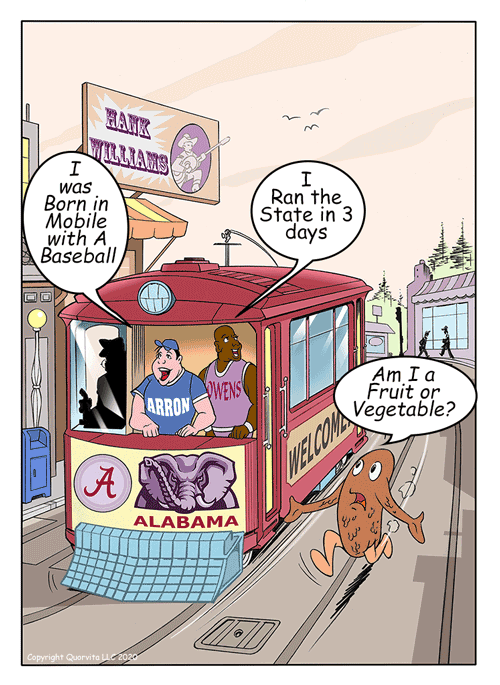 The Spanish were the first Europeans to settle in Alabama, followed by the French.  Alabama fell under British rule when the French lost the Seven Years’ War.  After the Revolutionary War, it became an American colony.  Alabama derived its name from the Choctaw, meaning “thicket-cleaners.”

The following is a random listing of various firsts and accomplishments:

Tuscaloosa is the birthplace of Robert Van de Graaff.  He invented the Van de Graaff generator, which is still used in most scientific laboratories.  An unexpected injury formed young Robert’s teenage years.  Fading back for a pass as a high school quarterback, a blind side tackle broke his leg.  That tackle started a chain of events.  He read books while his leg was mended, which led to a love of science.  Although he never graduated from high school, he studied engineering at the University of Alabama.  No small feat.    You might say that a broken leg pushed young Robert into science, and we became the beneficiary.

Waldo Semon was born in the small town of  Demopolis, AL.  He invented something so important that it’s almost impossible to go a single day without touching it –  “Plastic.”  Waldo was a typical know-it-all high school kid. He thought college kids were stuffy and narrow-minded, so he decided that he wouldn’t apply.  His parents had other ideas and convinced him to give them a try.  After all, what’d you have to lose?   “Plastic.”

Mary Elizabeth Anderson was born in Greene County and became a successful real estate developer.   Mary had a particular pet peeve-those annoying raindrops that gathered on her windshield and blurred her view.  Her idea was the windshield wiper.  She wrote to all the auto manufacturers hoping to invoke a bidding war.  After all, who wouldn’t want a windshield wiper?  They wrote back saying that her invention had no commercial value.  This shows that people sitting in comfy seats behind large desks are not always in touch with what people want.  Mary teaches us never to get discouraged by naysayers.  If we had listened to naysayers, we would have never made it out of the caves.

Miller Reese Hutchinson was born in Montrose, population 94.  He had a childhood friend who was deaf.   This motivated him to invent the hearing aid.  He also went on to invent the famous “AH-OO-GAH” auto horn.  Motivation is the energy needed to acquire success.  Without it, one must rely on luck or the lottery

Percy Julian was born in Montgomery as the grandson of enslaved people.  The city did not provide an education for African Americans after the eighth grade.  But that didn’t stop Percy.  He entered DePauw University as a sub-freshman, took high school classes at night, and graduated first in his class.  He discovered essential medicines to treat glaucoma and rheumatoid arthritis.  The obstacles facing Percy were enormous.  On the other hand, obstacles build character, perseverance, and success.

Hank Williams was a famous county music singer and songwriter from Mount, AL.  Like many hard-working Americans, he picked up whatever jobs he could to help pay the family bills.  He ended up shining shoes and selling peanuts to make ends meet.  But he suffered from spina bifida and eventually became dependent on painkillers.  Still, Hank used these hardships and physical limitations to write his songs.  If life gives you lemons, use them to make lemonade.

The Brown Bomber, Joe Louis, came from Chambers County, Alabama.  He was the son of a sharecropper but went on to become the world’s heavyweight champion.  This was during the Great Depression, and he single-handedly lifted the American spirit during these toughest of times.  He knocked out Hitler’s prize fighter Max Schmeling in the first round.  America needed Joe Lewis during this time.  He did not disappoint. Winning lifts your own spirits and the spirits of everyone who admires you.

Nat King Cole, from Montgomery, learned to play the piano at four while helping his mother in the church choir.  He tried classical piano training, but his heart lived for jazz.  He encountered racism while touring, but he believed he was an entertainer, not an activist.  He recorded a song that describes himself — Unforgettable.

Bennie Adkins was born in Auburn and became a Green Beret in the Special Forces.  He led his team through a bloody week-long battle in Vietnam despite being wounded numerous times.  His squad  radioed for artillery support, and when they asked for the enemy’s location, his response was, “They’re (blanking) Everywhere.”  He was awarded the Medal of Honor.  Bennie and his wife Sinise promoted the “Built-by-Vets” initiative to get veterans jobs.  He proves that once a fighter, always a fighter.