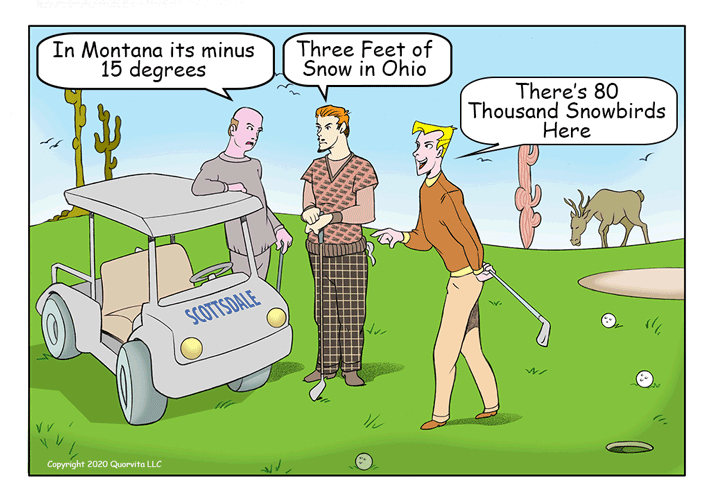 Native Americans occupied the area that is now Arizona until the Spanish claimed control over the land.  The area was ceded to the US after the Mexican-American War.  It became a state on Valentine’s Day.

Here are a few interesting facts about Arizona:

Cochise was born in southeastern Arizona.  His father was a tribal chief in the Apache Nation.  Tensions arose when the Spanish began asserting control over the Apache land. And relations did not improve when the United States took over. The US Army captured several of Cochise’s relatives, and in retaliation, Cochise took several American hostages.  A classic exchange scenario ensued.  Unfortunately, the negotiations fell apart when the hostages on both sides were killed.  An 11-year war ensued with 5000+ people killed.  Eventually, the US Army tricked another Apache chief into a parley under a white flag.  They killed him, as well.

Copper.   Arizona is our nation’s largest copper producer.  This orange metal is the third most frequently used after iron and aluminum.  It’s the only metal that will kill viruses on contact.  The Arizona copper industry brings in $9 billion annually while employing 48,000 American workers.  In 2000 the US was the world’s largest producer but lost that honor to Chile.  However, the US reserves are vast, standing at the fifth largest in the world.

Frank Luke, Jr. was born in Phoenix in 1897.  He excelled in sports and even tried his hand at bare-knuckle boxing.  A pilot during WWI, he was asked to take out German observation balloons.  These were not easy targets as anti-aircraft guns and fighter planes protected them.  No one wanted this daunting and downright dangerous job except Frank.  He viewed it as nothing more than another challenge.  In 2-weeks, he shot down 14 balloons and four fighter planes.  He achieved 18 victories during ten sorties, a feat unsurpassed by any pilot.  He was six miles behind enemy lines on his last mission and shot down three balloons.  Mortally hit by machine gun fire, he landed in a nearby field.  As a group of German infantry soldiers approached, he pulled out his Colt pistol and emptied his bullets, living up to the rumor that nobody messed with Frank Luke. He received the Congressional Medal of Honor. He was one tough Arizonian.

Hoover Dam was the largest construction project in the world at the time.  It provided jobs during the Great Depression.  They advertised for 5000 workers, and 20,000 showed up.  The dam stands 726 feet tall, twice the height of the great pyramid of Giza. The project took five years to complete.  It was paid off by selling water and electricity.  Strangely, Arizona opposed the dam, thinking California would steal the water.  The case wound up in the Supreme Court, and Arizona won.  But by the time the Supreme Court had decided the case, the Dam was already built.

Grand Canyon is one of the natural wonders of the world.  It is 277 miles long, 10 miles, and one mile deep.  Four and a half million people visit the Canyon each year, not counting those who see it from above.  For the adventurous ones, there are rafting trips down the Colorado River and donkey trips along narrow paths from top to bottom.  In 1956 two passenger planes took off from Los Angeles three minutes apart.  Both pilots wanted their passengers to see the incredible canyon beauty.  They collided in a deadly crash over the canyon.  The FAA (Federal Aviation Administration) was created two years later based on that accident.