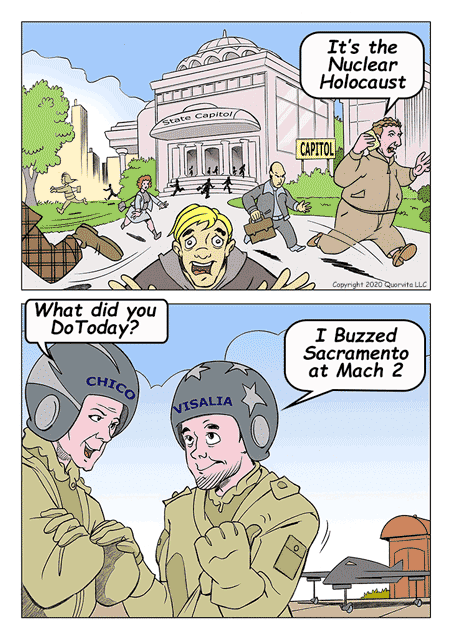 Here are a few interesting facts about California:

Steve Jobs was born in San Francisco.  He was brilliant and had difficulty making friends.  His parents used all of their savings to buy a new home so that Steve could change schools.  In 1976 Steve Woznick and Steve Jobs started Apple Computers in a garage and began selling Apple I, II, and the Macintosh.  Many years later, its Board of Directors pushed Steve out of Apple.  He jumped into Pixar, and sales skyrocketed with multi-million dollar hit after hit.  Apple began having financial problems, and the board asked him to return.  He did and fired the people that fired him.  That’s when he designed the iPod.  Steve felt that cell phones would be the next big craze.  Steve Jobs was one-of-a-kind and changed the world.

Tiger Woods was born in Cypress, CA. He was a child golfing prodigy who played golf with Bob Hope at age three and shot 48 in nine holes.  Every major college tried to recruit him, but Stanford won.  When he turned professional, he dominated the field, winning almost every title and award available.  Back injuries plagued him, and his golf suffered, causing him to drop out for many years.  In 2019 he returned and won the Masters, becoming the second oldest golfer after Jack Nicklaus to accomplish that feat.  Thank you, California, for giving us the “come-back kid.”

Barry Bonds was born in Riverside, CA. His father was former major league player Bobby Bonds.  Drafted by Pittsburgh, he lifted the attendance from their lowest point ever to breaking attendance records.  He signed with the San Francisco Giants and had a slugging percentage over .800.  He hit so many home runs that the other teams chose to walk him rather than pitch to him.  He turned down interviews, and journalists began spreading rumors of his doping.  Although he was never charged with any drug offense, one San Francisco prosecutor charged him with giving ambiguous answers.  The court, in a scathing decision, threw that out.  The media remained unapologetic, preferring journalistic license over facts.  Today, the greatest baseball player of all time is not in the hall of fame due to these allegations.

Theodore Harold Maiman was born in Los Angeles. He developed the red laser.  A laser is light with a single wavelength capable of traveling in a narrow beam over great distances.  It can be so powerful as to cut through steel and so delicate as to fuse the retina to the back of the human eye.  Lasers have revolutionized the communication industry.   Ted has been awarded almost every prestigious award but won – the Nobel.  Remember what Dr. Maiman said – “Be nice to nerds.  Chances are you’ll end up working for one.”