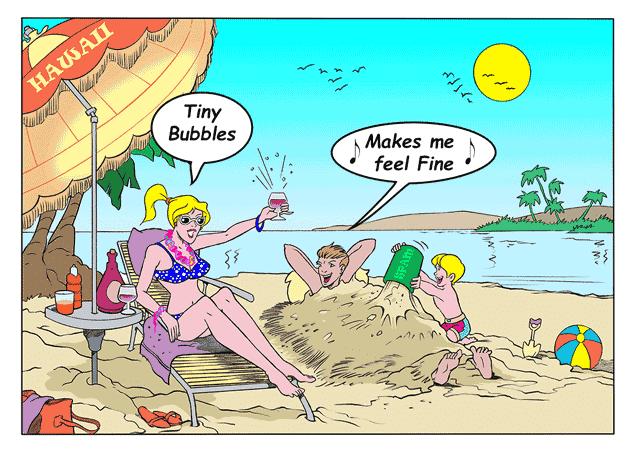 Captain Cook abducted the king of Hawaii and held him for ransom to get back one of his boats.  However, the islanders were not interested in negotiating and killed Cook.

Here are a few interesting facts about Hawaii:

Don Ho was born in Honolulu. He became the face of Honolulu and Hawaii in general.  The Don Ho Show was a hit with his signature song, “Tiny Bubbles.”  He opened with that song in the many luau’s that he performed for over 30 years.  He became the number one calling card for visitors when he was among his guests, singing and kissing many of the elderly ladies.  Many of his ten children helped him with various aspects of his family-oriented shows.  Don Ho died in 2006, but his infectious smile and personality live on.

Tourism is Hawaii’s leading industry surpassing $17 billion per year, with the average tourist spending about $200 per day.  Arriving by air and cruise ships, visitors revel in the warm tropical waters and inviting sunsets.  White sandy beaches are everywhere. They are matched with perfect weather—not too windy and not too hot.  Views of mountains wrapped with rainbows are frequent observations.   A fragrant lei often greets arriving visitors, along with an invitation to experience a delicious luau accented with hula dancing.  It is considered the number one destination for tying the knot.  Flowing lava from an active volcano and scuba diving with sea turtles are only a reservation away.  Hawaii offers it all.

The Attack on Pearl Harbor.  The first attack on Pearl Harbor was initially by water.  Five midget subs started the attack.  A destroyer sank two, one ran aground, a depth charge damaged a fourth, and the fifth missed its mark and sank.  The devastating airplane attack came next, coming in from five different directions.  Of the battleships that were hit, three were destroyed, but six were later repaired.  The Japanese had plans for a third wave, but because the three vast US aircraft carriers were not in the harbor that morning, Japan chose not to risk losing more planes. Despite the surprise attack, Japan failed to destroy many strategic sites, including large fuel reserves, repair bays, the Pearl Harbor base, and the American carrier ships. In response to the attack, the American people united as a nation in ways never before seen. As First Lady Eleanor Roosevelt said, “We are the free and unconquerable people of the United States of America.”