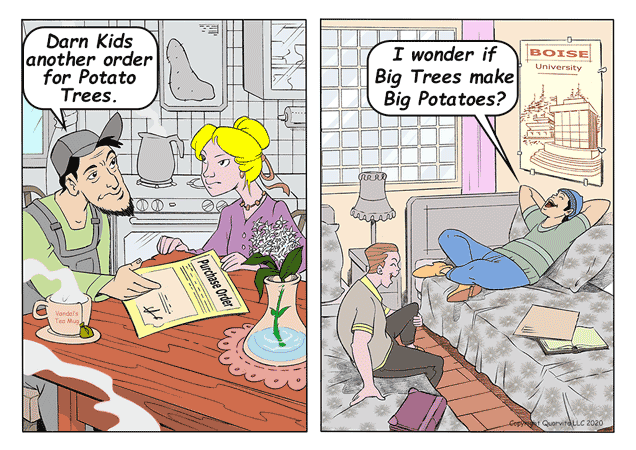 Idaho produces one-third of all the potatoes grown in the nation and 85% of the trout.  It was primarily an agricultural economy until about 1980, when high-tech began moving into the Boise area.

Here are a few interesting facts about Idaho:

The Average Farmer.  Getting down with nature and talking to plants is what hippies envision. But farmers don’t talk to their plants. They communicate with them by learning if they’re getting enough water, fertilizer, and sun. In Idaho, pest control is not yelling at a noisy neighbor. It deals with insects, fungi, bacteria, and viruses that wreak havoc on crops. When equipment breaks down, a farmer doesn’t call AAA™. They fix it.  All farmers know how to weld, overhaul tractors and equipment, and diagnose problems with the Wi-Fi network connections.  Farmers work from 4 a.m. until 7 p.m., six days a week, with Sundays reserved for praying. People who think they are uneducated are ignorant and sorely lack a basic understanding of what they do. They are the people who keep us alive.

Isaac (Ike) Nelson was a potato farmer in Aberdeen, Idaho.  He dropped out of school in the 8th grade.  His grandson went to engineering school and gave him a calculus question from his textbook.  Ike replied, “Give me a couple of days.”  When his grandson returned, there were chalk marks all over the cement porch with an answer underlined three times.  The grandson opened the answer page in his textbook.  It was precisely what grandpa underlined.  The grandson asked, “How’d you do it?”  “Common sense,” Ike replied. “I’m just an average farmer.  Henry would have finished it in a couple of hours.”

Chief Joseph was the leader of the Nez Perce Indians.  When settlers found gold, the Nez Perce were asked to leave their land.  General Howard tried to enforce the eviction, but Chief Joseph fought back, defeating the general in every battle, including an incident where his braves quietly took all of the ammunition while soldiers slept.  General Howard sent a telegraph to a Fort near Missoula asking the 35 soldiers to hold the Nez Perce in the narrow pass.  The soldiers enlisted 50 civilians for help.  Chief Joseph arrived and announced that he and his warriors were passing through and that they would do them no harm.  The civilians were satisfied and quickly departed.  The soldiers wisely decided to let them pass.  This Fort acquired a new name – Fort Fizzle.  Have to love that military humor!

Boise State – Oklahoma Football Game.  It was the 2007 Fiesta Bowl™.  Oklahoma had the great Adrian Peterson, and every player outweighed each Boise State player by at least 36 pounds.  It was a classic David vs. Goliath match-up.  But Boise State refused to be intimidated. They quickly scored, followed by a second touchdown, grabbing a 14 to 0 lead.  The score then flip-flopped, and the game went into overtime.  Oklahoma scored first with a touchdown, which Boise matched.  Boise decided to go for a two-point conversion for the win.  They lined up, and the quarterback reached back to throw.  The fullback snatched the ball out of the quarterback’s hand in a classic Statute of Liberty play and ran it in for the two points.  David beat Goliath that day.

Lou Dobbs was born in Texas but grew up in Rupert, Idaho.  He played the sousaphone in the high school band.  He was accepted at the University of Idaho but chose Harvard instead.  Go figure.  He joined CNN™ in 1980 and hosted Moneyline™, attracting record viewers.  However, when he hooked up with Fox News™, Moneyline™ immediately lost 25% of its audience. Still, Fox Business News™ became the most watched business news for three years and counting.  Lou Dobbs has a reputation for speaking on controversial topics. He refuses to be intimidated by the traditional mainstream media, making him a favorite of the people.

Brad Little grew up in Emmett, Idaho as a third-generation rancher and farmer.  His grandfather came to Idaho from Scotland in 1894 and settled in the Emmett area, raising sheep and cattle.  It was a long 30 miles north of Boise at the time.  However, Boise has been one of the fastest growing areas in the United States, and some now consider it a suburb.

Brad quickly learned the values of hard work, perseverance, and faith from his parents and grandparents. He attended the University of Idaho in 1977 and majored in Ag Bus.  He met his wife, Teresa Soulen, at the University.  She was a Delta Gam, and he was a Phi Delt.  They have two boys and many grandchildren.