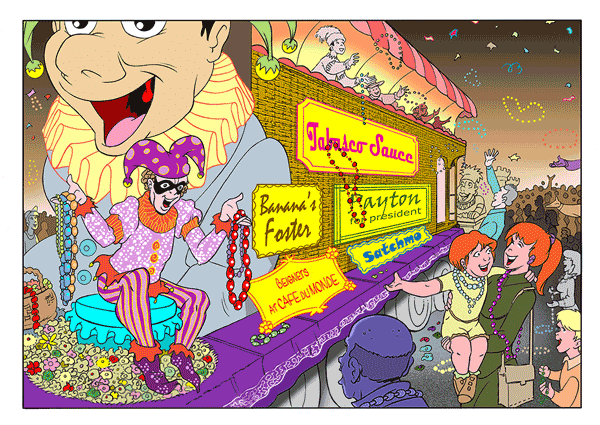 In 1682 De La Salle reached the mouth of the Mississippi and claimed all the land it drained into as belonging to King Louis XIV of France.

Here are a few interesting facts about Louisiana:

Louisiana Purchase was steeped in intrigue encompassing a secret deal, an impending war, a sugar loss, and a need for money.  The French secretly ceded the territory to Spain, and Spain agreed to transfer it back.  President Jefferson sent an emissary to Paris to negotiate the purchase of New Orleans.  Napoleon was preparing for war with England and needed money to pay his army.  He lost his sugar income in the Caribbean, and Spain was dragging their feet in transferring the land back to France.  The emissary was a tough negotiator and implied that the US might help England.  Napoleon said, “the hell with it,” and offered to sell New Orleans and all the land west of the Mississippi River for fifteen million.  Fearing that Napoleon might back out, the American emissary signed the agreement without notifying Washington.  When he returned to the US, the House motioned to deny the purchase.  It failed by two votes.  A skilled negotiator can often secure a better deal than military action.

The battle of New Orleans was fought during the War of 1812 with England.  This war had many ups and downs, including burning the White House a year earlier.  With a force of 8000, the British planned to take over New Orleans and control the Mississippi.  General Andrew Jackson stood in their way with a few army regulars, but mainly with a ragtag group of volunteers.  The British were unimpressed. They arrogantly charged the hill that General Jackson held.  Wave after wave were slaughtered until the British gave up and sailed for home.  The battle lasted only 30 minutes.  2000 British soldiers were killed along with 100 Americans in one of the most one-sided battles in history.

Louis Armstrong, aka Satchmo, was born in New Orleans.  His gravelly voice, combined with a charismatic presence, made him stand out from other singers.  He and a group of his friends played on riverboats up to Chicago, where he perfected his legionary jazz style of music.  Of the many music types, jazz is genuinely American, and Satchmo is its star.  He traveled the world during the Cold War, spreading joy as the people’s ambassador of peace.  His trumpet and hanky became his trademarks, recognized everywhere.

Peyton Manning was born and grew up in New Orleans.  Peyton was so good in high school that 60 top colleges sent recruitment letters.  He chose Tennessee and ended up breaking all of their records.  The Indianapolis Colts picked Peyton on the first ballot in the draft.  He did not disappoint, taking them on two trips to the Super Bowl and one championship.  In 2011 he had surgery for a neck injury and was out for the season.  Media pundits believed his football career was over, possibly influencing Baltimore to trade Peyton to the Broncos.  Big Mistake.  His career was far from over.  He took Denver to two Super Bowl trips and one Super Bowl championship.  Peyton retired a month later, leaving on top.  Never underestimate the persistence of the human spirit. Just because you’re down doesn’t mean you’re out.