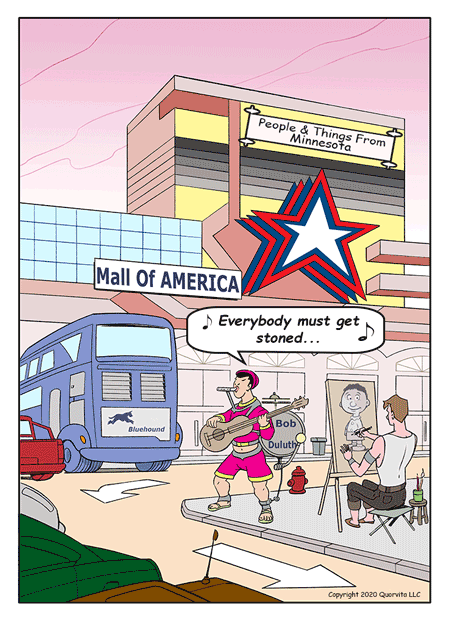 Here are a few interesting facts about Minnesota:

Minnesota Military Family Foundation was established in 2004 in Golden Valley, MN.  Bill Popp created this foundation to assist military personnel and their families.  Everyone in the foundation volunteers their time.  That means nearly 100 percent of their contributions are sent to those in need.  This is one of many examples of how wonderful the people of Minnesota are to our military families.

Wayne M Bissell from Walker, MN, and J Royden Stork from Frost, MN, was in B-25 bombers on a one-way trip to Japan.  They participated in the Doolittle Raid, America’s first successful retaliatory strike after Japan attacked Pearl Harbor.  Since there were no land bases nearby, all of the bombers were stripped of their armaments to allow them to take off from a carrier.  If spotted, they would have been sitting ducks.  The plan was to fly over Tokyo, drop their bombs, and then bail out or land in China.  Out of 80 men in the raid, three were killed, eight were captured, and 69 made it back. Bissell and Stork succeeded in their mission, helping to change the course of World War II. Their bravery led to numerous honors, including the Distinguished Flying Cross, the Air Medal, and one of the Nation’s highest honors – the Congressional Gold Medal.

Miracle on Ice.   Herb Brooks, Bill Baker, Neal Broten, Dave Christian, Steve Christoff, John Harrington, Steve Janaszak, Mark Johnson, Mark Pavelich, Mike Ramsey, William Buzz Schneider, Eric Strobel, and Phil Verchota were amateur hockey players from Minnesota who represented the US at the 1980 Olympics.  The Soviet Union, which had previously dominated the Olympic hockey competition, boasted a full roster of professional players.  Unsurprisingly, the Soviets beat the US team by 10 to 3 in an exhibition two weeks earlier.  But during the big game, the crowd counted seconds off the clock as the US team won. Total pandemonium ensued.  In the locker room, the US team spontaneously broke into a chorus of “God Bless America.”

Robert Rowe Gilruth was born in Nashwauk, MN. He wanted to become a spaceman from the time he played with rubber bands and flipped objects into the air in his grade school classroom.  He joined NASA as soon as possible in the hypersonic velocity rocket section.  When President Kennedy announced that the US would put a man on the moon, Gilruth stepped to the front of the line, becoming NASA’s first director.  But NASA had to design, construct, and manage everything.  At that time, integrated circuits had not yet been developed, the hand slide rule was still being used, and the first Apple™ computer would not be invented for another eight years.  The tasks faced by Dr. Gilruth and the people at NASA were astronomical. But, they rose to the challenge. The race to put a man on the moon caused the fastest advancement in science.