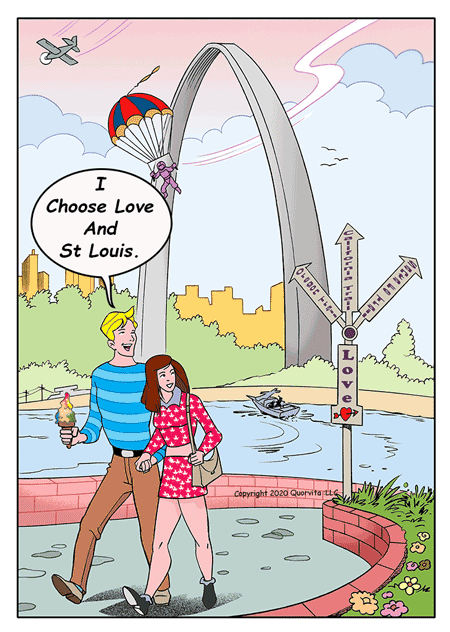 Here are a few interesting facts about Missouri:

George Washington Carver was born in Diamond, MO, as a slave.  At one week old, he, his mother, and his sister were kidnapped by night raiders and sold in Kentucky. It was a cruel but common practice at the time.  Their legal owner, Moses Carver, sent a neighbor to retrieve them. Unfortunately, only George was located. Moses and his wife raised George and his brother as if they were their children, teaching them how to read and write. Eventually, George worked through college, becoming the first African American to earn a Bachelor of Science degree. He went on to get his Master of Agriculture degree and eventually became president of Tuskegee University.  He was a genius with soil restoration, introducing new ideas such as crop rotation after discovering that growing peanuts could revitalize depleted soils.  And, if all that wasn’t impressive enough, he was also a lifelong inventor with over 300 peanut-related inventions. How he could accomplish so much defies all possible odds with the obstacles he faced.

Casey Stengel and Yogi Berra were both born in Missouri.  Casey in Kansas City, MO, and Yogi in St Louis.  Although Casey played for the Brooklyn Dodgers, his fame came from managing the New York Yankees.  He took the Yankees to five consecutive World Series wins and started an unmatched dynasty.  Casey was a prankster.  Sitting in the dugout, he caught a sparrow and put it under his hat.  When he came up to bat, he tipped his cap, releasing the bird to a thunderous approval by the fans.  The Yankees won the World Series a record-breaking 27 times.  Yogi Berra was drafted by the Yankees and also proceeded to break records.  He perfected what would be called “Yogi-isms.”  For example, he would say, “90% of baseball is mental, and the other half is physical,” and, “It ain’t over til it’s over.” These two Missouri players were so dynamic that everyone loved baseball more because of them.

Walt Disney was born in Chicago but grew up on a farm in Marceline, MO.  This small-town life was one of his most significant influences.  At nine years of age, he would rise at 3:30 a.m. to deliver newspapers and attend grammar school.  In high school, he began drawing for the student newspaper.  After military service, he returned to Kansas City, where he developed his skills with animation.  He started his own company but had to file for bankruptcy.  From there, Walt headed to Hollywood. The rest is history.  His net worth exceeded a billion dollars when he died in 1966.  And his name is so iconic that it will always be synonymous with joy and magic.

Rush Limbaugh was born in Cape Girardeau, MO.  As a child, he wanted to be on the radio. He landed his first radio job in high school and decided to stick with it.  However, his start was rocky. Several radio stations, from Missouri to Pennsylvania, let him go because he was too conservative.  Nevertheless, he became the top radio commentator in Sacramento, CA.  He now has a following of more than 25 million listeners.  Although he’s expressed many controversial ideas, he’s been a champion of the people, raising more than 3 million dollars for the Leukemia Society and more than 2 million for the US Marine Corp Children’s Scholarship.

Dale Carnegie was born in 1888 in Marville, MO, where he attended a one-room school.  He enjoyed public speaking and debate and wondered why others had problems speaking in front of groups.  He had various sales jobs but quit to become an actor – an occupation frowned upon by his parents.  He wrote a book entitled How to Win Friends and Influence People. It was his best-selling book and one that remains popular even today.  It has sold five million copies and has been translated into 31 different languages.  His speaking classes are taught throughout the United States and are required by many businesses.  His secret to success is to volunteer to speak whenever possible, repeat a person’s name after being introduced,  and always notice and compliment those working in the background.  Every successful person started out working background jobs.